The Russian General Staff has declared the liberation of Syria from Islamic State (IS, formerly ISIS), stating that all territories previously under terrorist control were liberated in the final push by the Syrian Army.

“All terrorist units of ISIS on Syrian soil have been destroyed, and the territory is liberated,” Armed Forces Chief of Staff General Valery Gerasimov said.

“Therefore, as of today, there’s no territory controlled by ISIS in Syria,” he added. Gerasimov made the announcement during an annual briefing for foreign military attachés.

After being briefed on the successful military operation on both banks of the Euphrates River in Syria by Russian Defense Minister Sergey Shoigu, President Vladimir Putin said that the political process and organization of the Syrian people’s congress in Sochi, agreed upon by Russia, Iran, and Turkey last month, must now become the focus. Among other goals, Putin named the drafting of a new constitution, and, eventually, parliamentary and presidential elections.

“Naturally, there might be some spots of resistance, but the military work has been largely completed in the area and at the time. Completed with a full victory, I repeat, with a victory and defeat of the terrorists,” Russian leader said.

The peace process, however, will be “a very big and lengthy job,” Putin cautioned. For this to happen though, the bloodshed in Syria must stop completely, he said. Securing the recent achievements and reinforcing the fragile de-escalation zones should be the first steps to that end, Russia’s president added.

Russia began providing support to Syria following an official request from Damascus in 2015 to prevent the terrorists from overrunning the country completely. Russia’s help allowed the Syrian Arab Army to turn the tide and liberate large areas of the country previously occupied by the jihadists. Smashing the blockade of Deir ez-Zor, an IS stronghold in eastern Syria, represented a turning point in this year’s campaign against the terrorists, ultimately leading to their demise. 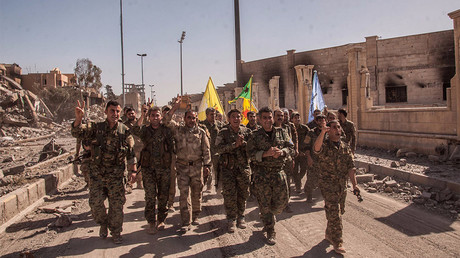