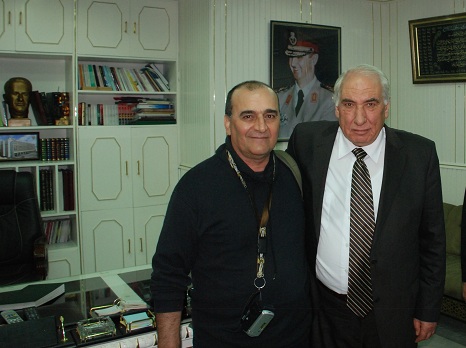 DARAA, (SANA) – A joint Italian and Cuban media delegation on Thursday visited Daraa city and inspected the situation there.

The delegation members toured the state institutions and private properties damaged by the armed terrorist groups including the Justice Palace and participated in the funeral processions of martyrs Abdel Hamid Hosni al-Taha, a parliamentary candidate, and Chief Warrant Officer Kamal Mohammad al-Zou’bi.

The owner of the Syrian Free Press Network, Filippo Fortunato Pilato, and Odai Ramadan, a leading member from the Italian Communist Party, told SANA that the visit gave them the opportunity to clearly and closely inspect the reality, especially the gunmen’ attacks against police members and civilians.

They said that they will convey the reality of the falsification and media campaign launched against Syria.

The Cuban journalist Luis Beaton from Prensa Latina agency expressed surprise at the burning of the Justice Palace, stressing that the citizens are living normal daily life contrary to news broadcast by media.

The delegation members also met Daraa Governor, Mohammad Khaled al-Hanous who briefed the delegation on the crimes committed by the armed terrorist groups which escalated their attacks in violation on the plan of the UN special envoy to Syria Kofi Annan.