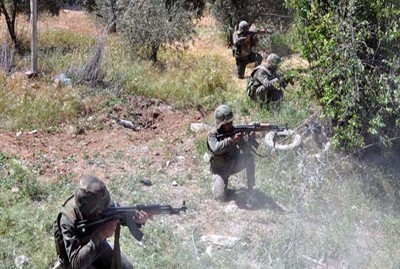 The army stepped up operations against terrorist groups in various areas, including targeting their gatherings and hideouts and destroying cars trasporting weapons for them. Many terrorists got killed and others were injured in the operations.

Units of the armed forces clashed with an armed terrorist group that tried to sneak into the northern side of Abo al-Duhour Airport in the countryside of Idleb.

A military source told SANA reporter that the clashes resulted in the death and injury of all members of the terrorist group and the destruction of their weapons and ammunition.

The source also mentioned that other army units destroyed terrorists’ gatherings and dens, along with the weapons and ammunition inside, in the villages and towns of Darkoush, Ein al-Bareh, al-Tibat, al-Shaghr, Binnesh, Bzabour, al-Hamidiyeh, Um Jarin, Jarjanaz, Maaret al-Numan and Kfarrouma.

The terrorist Yaser Abdul-Rahim , nicknamed Abu Aref, leader of an armed terrorist group, was identified among the dead.

The army destroys terrorist equipment coming from Turkey in Aleppo

Units of the armed forces destroyed cars loaded with weapons and munitions coming from Turkey in the villages of towns of Aleppo.

An official source told SANA that an army unit clashed with members of an armed group who tried to infiltrate to al-Kindi Hospital, killing many terrorists and injuring several others.

The source added that another attempt by terrorists to infiltrate into Aleppo safe neighborhoods was foiled by the army in al-Lairamoun, Khan al-Wazir in Old city.

It said that other army units destroyed weapons and munitions which were loaded by cars coming from Turkey.

Syrian Arab Army units continued their operations pursuing both “Free Army” militia and “al-Nusra Front” in the town of Maaloula and its surroundings in Damascus countryside, killing and injuring a number of terrorists mercenaries.

Other army units managed to achieve notable advancements where army marched from the eastern mounts of al-Zabadani till the Radio broadcasting Tower putting the whole region in between under control.

Also, weapons and ammunitions loaded in a vehicle of the militants were fully destroyed after the army targeted the shipment, Breaking News correspondent reported.

In the meantime, units of Armed Forces carried out a series of operations in Eastern Ghouta, where it targeted more than 20 gunmen after a successful qualitative operation in Zibdeen farms in al-Mleiha area.

In al-Qassemiah farms, units of Syrian Arab Army targeted a gunmen gathering, as it implemented a series of large-scale operations in the southern countryside of Damascus.

In Daraya city clashes took place between Syrian Arab Army and terrorist armed men on several axes, the thing that led to the killing and wounding of many of them.

Units of the Syrian Army have fully controlled al-Arbain Mount, in Idlib countryside, after it targeted several gunmen gatherings al-Nusra-affiliate.

Army targets many militant gatherings in Homs and its countryside

In Homs and its countryside, units of the army targeted several gunmen headquarters in al-Rastan, north of al-Khazzan al-Kabir in al-Dar al-Kabira and in the village of Ain Hussein al-Janubi as well.

Finally, Syrian army units clashed with gunmen in al-Dahabi St. in Bab Houd and al-Qarabis, which resulted in the killing and wounding many of them.