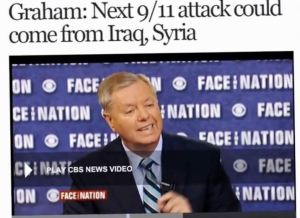 More about this video at
http://www.youtube.com/watch?v=dYXXcwuJtbQ

US-NATO Proxy War in Iraq and Syria: US Financing and Training of “Moderate” ISIS Rebels in Syria 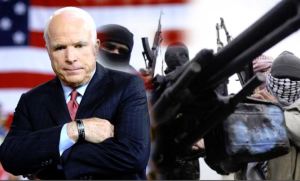 Url of this article:
http://www.globalresearch.ca/us-nato-proxy-war-in-iraq-and-syria-us-financing-and-training-of-moderate-isis-rebels-in-syria/5389053

As this latest Western manufactured ‘terror nightmare’ continues to unfold in Iraq and Syria, we’ve learned that US President Barack Obama has now asked Congress to authorize direct military aid and equipment to be sent to ‘the rebels’ in Syria. This latest stage of Washington’s project in Syria is said to total $500 million, expanding the covert CIA/FSA training facilities that have ties to ISIS in both Jordan and Turkey…

The move to provide US military training and supply additional arms the so-called ‘moderate’ rebels is extremely calculated, most assuredly, so that both the left and right political parties in the US may share a certain blowback-blame, if they agree to allocate funds to insurgents that have a proven history with the formation of ISIS, as the Saudi Arabian-backed Jihadist paramilitary group, “Front Victory“, the group most likely responsible for ‘Chlorine Chemical Attacks’ which Washington made such noise over in Syria in 2013, had its first and second generation founders come out of the ‘Islamic State of Iraq’, directly linking them to the training facilities in Jordan and Turkey.

The US media storm has been spinning overtime over ISIS, touting many dramatic pictures of mass-executions as ‘evidence’ of their takeover of Iraq, and using this crisis yet another pretext to ramp-up military budgets and security threats at home. Most of the ‘mass execution’ images put forward in media have since been exposed as pure fakery, although this hasn’t deterred US and European media ‘experts’ or US State Department and UK Foreign Office officials.

As the ‘ISIS Crisis’ appears to spiral out of control, it exposes the Western government-transnational corporate agenda, that seeks to expand the current proxy war in Iraq, as well as to neighboring nations by directly financing terror rebels – this time with Congressional approval.

While many think-tanks and media rooms proclaim to be very much against the terror-grip of Al-Qaeda’s offshoot ISIS by publicly denounce their actions, the $500 million dollar appropriation appears to be a cash injection into the radical destruction of both Iraq and Syria. The current destabilization campaign in Iraq will have a number of unforeseen outcomes, including the fracturing of Syria and Iraq, and the predictable calls from Erbil for a newly formed ‘Kurdish State’ in Northern Iraq.

If $500 million is being funneled to Islamic fighting groups in Syria (and Iraq), then exactly how is this money transferred and who will handle and distributed this small fortune from US taxpayers and procure arms on the ground? Most likely, this will be handled by US personnel and US military contractors who will be in the war theater. This is direct involvement, regardless of how Washington would like to spin it.

If you follow the terrorists, the money and the arms over the last 4 years – it leads back to western governments, their allies and their intelligence bodies…

Back in July of 2013, there was an unprecedented and unlikely terrorist jail-break at three separate locations, that elevated the global terror threat not seen since the early days of Bin Laden’s transformation into the world’s most notorious boogeyman, Here at 21 WIRE we reported the sensationalized escape:

“The first prison break happened on July 22, as more than 500 inmates were sprung from two different prisons in Iraq. Al Qaeda claimed credit for the operation which somehow managed to take out 120 Iraqi guards and SWAT forces in attacks in Taji, north of Baghdad, and the notorious Abu Ghraib prison.

Five days later on July 28, bumbling security spokesman Mohamed Hejazi admitted to the Libya Herald that some 1,200 prisoners escaped during the weekend from the Kuayfia detention center in Benghazi.

The third bust out then took place the following day on July 29, as Taliban and al Qaeda operatives descended on the city of Dera Ismail Khan and walked out with 250 Pakistani Taliban prisoners held there, but not before killing 12 policemen and cutting the throats of four Shi’ite prisoners on the way out.

On each occasion, local authorities believe that there may have been a degree of ‘insider’ help.

All in all, this epic string of jihadi jail-breaks has let loose over 2000 alleged terrorists and militant gunman for hire.

Could all three of these well-timed jail-breaks have been accomplished with such precision… without the help and support of intelligence agencies like the CIA, MI6 or Mossad?”

Many critics have charged that these jail breaks have directly benefited interests of the West, as the newly released militants could have been deployed to places such as Iraq and Syria, as well as other CIA friendly locales. The timing is uncanny.

US and Saudi-backed Terrorist Groups Coming Out of Syria

Known terrorist groups have been operating in Syria for over three years now – mostly with the tacit approval of war planners in Washington, London and Paris. Folded into the ‘Syrian Rebel’ confab, these terrorist fighting groups have all but received the full backing of NATO Allies (arms) and Gulf states Qatar and Saudi Arabia (money). They include, but are not limited to, Saudi Intelligence-backed Jabhat al-Nusra or ‘al Nursa Front’, the Libyan Islamic Fighting Group,  Abdullah Azzam Brigades and Al Baraa ibn Malik Martyrdom Brigade, the jihadist group Ahrar al-Sham, the PKK (in northeast Syria), and Kata’ib Mohadzherin from the Russian Caucus region – to name only a few.

“Recently in Dagestan the Sufi spiritual leader Said Efendi Chirkeisky was killed by a suicide bomber along with a few followers. This happened in late August and the closeness to the recent attack against Sufi leaders in Tatarstan is a clear reminder that Salafism is a potent force within parts of the Russian Federation. Therefore, not surprisingly the Russian Federation is extremely alarmed by major Western powers once more working in collusion with the FSA, al-Qaeda and a whole array of Salafi terrorist organizations.”

It’s worth noting here: like Libya’s new militant governor of Tripoli, Abdel Hakim Belhadj, the Chechen terrorist group Kata’ib Mohadzherin’s leader Airat Vakhitov was also under US supervision for years – imprisoned at Guantanamo Bay, Cuba circa 2002, after being captured by U.S. forces in Afghanistan. Both were Belhadj and Vakhitov were released by the Pentagon only to be repatriated in the field again – back into fighting regions to organise al Qaeda-type Islamist groups – both active in countries which the US and NATO have been actively vying for regime change – in Libya and Syria, respectively. You can draw your own conclusions here about what Guantanamo is in reality, a fact which was confirmed by the Penny Lane leaks regarding the recruitment of double agents out of Gitmo.

“One Qaeda operative, a 56-year-old known as Abu Thuha who lives in the Hawija district near Kirkuk in Iraq, spoke to an Iraqi reporter for The New York Times on Tuesday. “We have experience now fighting the Americans, and more experience now with the Syrian revolution,” he said. “Our big hope is to form a Syrian-Iraqi Islamic state for all Muslims…

All of this constitutes open international war crimes – directly enabled by the US and its allies. Beyond any reasonable doubt, this current ‘ISIS Crisis’ is a direct result of western interests fueling the Libyan and Syrian civil wars over the past 4 years.

There have also been reports suggesting that the perceived inaction on part of the US and its deliberation on direct military involvement, is actually a strategic process by planners in Washington and Tel Aviv to covertly engage in an open-ended proxy war – certainly the case across the Middle East today.

Media coverage regarding Israel is being kept mostly in the dark, which is nothing unusual considering the protocol for US media regarding any of its illicit activities or regular breaches of international law, but now it’s gapingly obvious that Israel is playing a central role in this theater. This was even more evident when you consider the \ recent  Israeli air strikes on Syria last week, which appeared to provide air cover for the masked Islamic State in Iraq radical terrorists. I noted in my first report about this crisis that for the first time, an SCF Altai tanker delivered a large amount of Kurdish oil to Israel on June 20th, this would link ISIS as a partial Israeli creation, if the Kurdish oil is coming over from terror controlled oil field’s in Iraq. An Israeli energy ministry declined to disclose a comment on the crude oil deal with the Kurdish Regional Government. It should be stated that Iraq has boycotted Israel and has no official oil contract with them.

The Kurdish region has also made its first oil shipment to the international market bypassing the central Maliki government in Baghdad.

One wonders how much of this oil is being shipped to Israel? 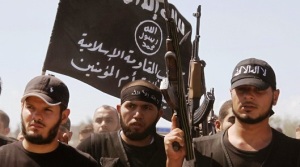 A recent Daily Telegraph article reveals that armies of Al Qaeda terrorists are using NATO-member Turkey as a springboard for their invasion of neighboring Syria.

NATO is the chief executor of the so-called “War on Terror,” started in 2001 after Al Qaeda terrorists allegedly flew four passenger planes into various targets on America’s east coast, including the World Trade Towers and the Pentagon. Nearly 3,000 people died in a single day. The invasion of Afghanistan promptly followed based on the pretense that it was “harboring” members of Al Qaeda. The invasion and nearly decade-long occupation of Iraq followed shortly thereafter.

Yet despite all of this, Turkey, a NATO member since the early 1950′s, appears to be guilty of the very crime Afghanistan was allegedly invaded and to this day still occupied for, harboring Al Qaeda terrorists. An army of Al Qaeda is (and has been for nearly 3 years) using southern Turkey as a safe-haven and staging ground for the invasion of Syria – disingenuously portrayed by the Western media as a “civil war.”…

………read the full article at this link…
http://www.globalresearch.ca/nato-and-cia-support-al-qaeda-terrorists-in-syria/5356391

MORE ARTICLES AND GEOPOLITICAL ANALYSIS AT