THE RECENT ISRAELI STRIKES IN THE GOLAN AREA MUST BE READ AS A TOTAL PANIC BY THE ZIONISTS, IN THE WAKE OF THE MILITARY SUCCESS ACHIEVED BY THE SYRIAN ARMY AND LEBANESE RESISTANCE. 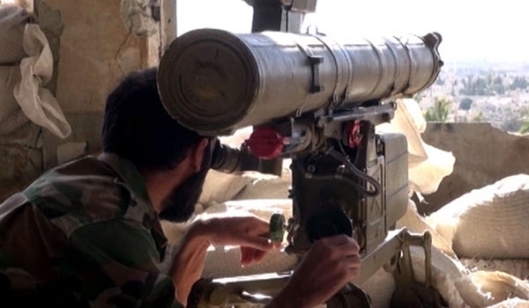 The fall of Zabadani would be a disaster for Israel, say military analysts

According Wasef Erekat, Palestinian retired general and military expert, the resumption of Zabadani by the Syrian army and Hezbollah would be a major military defeat for Israel, also greater than the fall of Tel Aviv.

Interviewed by Al Mayadeen, the retired General has focalised his analysis on the strategic situation of the Golan.

“Israel seeks simply to totally impound the Golan Heights. Israel henceforth feels the need to launch limited attacks against the Golan, to ensure some achievements in this strategic region”.

The recent Israeli strikes in the Golan area must be understood in this sense.

According to the Syrian military expert Tahssin al Halabi, the Israeli’s raids against the positions of the Syrian Arab Army in the Golan Heights is the sign of a total panic by the Zionists, in the wake of the military success achieved by the Syrian and Lebanese Resistance against the terrorist gangs [in the Zabadani area], which are supported [with weaponry and medical assistance] by the Zionist’s occupation forces.