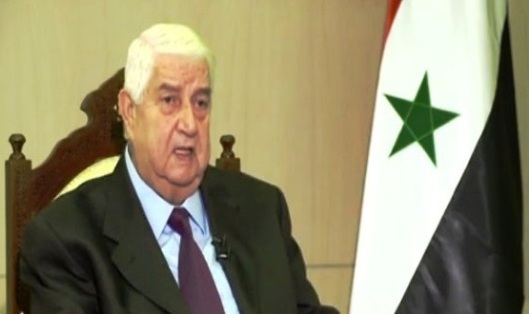 Al-Moallem: Russia’s participation in fighting terrorism will turn the tables on the conspirators

“There is something new beyond (Russia) providing Syria with weapons, which is Russia engaging in fighting ISIS and Jabhat al-Nusra,” said al-Moallem in an interview with the Russian RT channel that was aired on Saturday.

“This is a major issue. It is something that will turn the tables on those who conspired against Syria and will show that the US and its coalition have had no strategy for combating ISIS, and the evidence is that they have grasped the Russian message and now want to coordinate and cooperate with Russia,” al-Moallem added.

He made it clear that what Syria is doing along with its friends in Russia is open and that there is nothing going on under the table, pointing out that Russia does not hide its will to participate in fighting terrorism.

“We in Syria,” he said, “trust the Russian Federation’s leadership and its intention to participate. What we are doing is open and known to all.”

Al-Moallem explained that Russia is acting under the international law and in coordination with Syria, criticizing the US for acting otherwise as far as the international coalition it leads against ISIS is concerned.

He said the US is busy counting the number of airstrikes carried out by the coalition and not the results “because they are ineffective,” stressing that the only force fighting Jabhat al-Nusra and ISIS is the Syrian Army.

The Minister renewed Syria’s welcoming of Russian President Vladimir Putin’s initiative for establishing a wide front of countries to cooperate with the Syrian government in facing terrorism, stressing that Syria welcomes any country that is really willing and sincere to fight terrorism.

As fas as the political solution is concerned, al-Moallem stressed that the Syrian government does not mind starting political dialogue in parallel with the efforts of fighting terrorism.

“We don’t want to walk in a dark tunnel. We want to walk in an open path,” said al-Moallem, stressing that it has become today clear that fighting terrorism is the priority, “but this doesn’t mean that we are not pursuing political dialogue.”

“What the Syrian citizen wants above everything else is security,” he added.

Asked about the situation in al-Zabadani and the ceasefire there, al-Moallem explained that there had been four attempts at establishing ceasefire and there were results, but in each time the terrorists received instructions to break it, noting that there is now a fifth attempt at a time when the Syrian army and the Lebanese Resistance are only meters from resolving the battle in al-Zabadani.

“We care for the people’s lives and we are open for considering the ceasefire,” he added.

Mikdad: “Russia supports Syrian Army as the only active force on the ground against terrorism”

Deputy Foreign and Expatriates Minister Fayssal Mikdad said that Russia is committed to the principles of the United Nations and to international law, and that there is no concern over any initiative it may propose for ending the crisis in Syria.

In an interview given to al-Mayadeen TV on Saturday evening, Mikdad said that Russia is providing support to Syrian Arab Army because it is the only force on the ground in Syria that is active in fighting terrorism, noting that even the Americans and the Saudis know that.

He stressed that Syrian-Russian relations are deep-rooted, and that the Russian military support dates back to many years ago and is part of existing agreements, adding that it increased recently due to the growing challenges imposed by the West on Syria.

Reiterating what Foreign and Expatriates Minister Walid al-Moallem said recently, Mikdad said that up to this moment there is no joint Syrian-Russian combat activity on Syrian ground, noting that it’s natural for any country facing dangers to ask for assistance from its friends and allies.

Regarding the work plan that Russian President Vladimir Putin is due to unveil at the UN General Assembly soon, Mikdad said that President Putin is committed to the unity of Syria’s land and people and to supporting it against terrorism, and that he is also against any foreign interference in countries’ internal affairs.

The Deputy Minister said that the U.S. and its regional pawns, particularly Saudi Arabia, have invested in terrorism and sought to employ and spread it, but this backfired because terrorism is bound to move to other areas in the region, noting that terrorism has already begun to strike in Turkey, Saudi Arabia, and elsewhere in the world.

Mikdad wondered what the alliance against ISIS has achieved over the course of over a year, asserting that Western states aren’t serious about fighting terrorism and that they are merely concerned with counting the number of operations regardless of their results.

He went on to say that Syria withstood for five years in the face of terrorism, and that fighting terrorism is the utmost priority, wondering what good will come of discussing broad lines for resolving the crisis while ISIS, al-Nusra, and Al Qaeda are running amok, adding that those who ignore the need to fight terrorism are both wasting time and helping terrorism spread in the region and the world.

Mikdad voiced doubts on whether or not the U.S. administration has come to understand that supporting terrorism in any country in the world will not lead to the success of its political plans.

On the refugee crisis and how it affected some states’ positions, including France, the Deputy Minister said that France has been the most hostile European country regarding Syria, and its involvement in the crisis in Syria is a disgrace for France’s political leadership, not the French people.

He went on to say that it’s a saddening thing when any Syrian leaves their land, but he also noted that Turkey set up camps before the crisis even began in Syria with the sole intention of blaming the Syrian government for immigration, and this is untrue as most people fled areas controlled by armed groups and headed to areas controlled by the government.

Mikdad also said that Turkey caused the current refugee crisis to take revenge on the states that refused to take part in its bid to establish buffer zones and no-fly zones, asserting that Europeans must hold the Turkish government and other government involved in falsifying passports accountable for their actions.

On Jordan’s current position, the Deputy Minister said that there needs to be a bigger shift in Jordan’s position, because what harms Syria harms Jordan. He also saluted the Jordanian people, clans, intellectuals, and army who supported Syria.

Regarding Saudi Arabia, Mikdad said that the Saudi role is deadly to the whole Arab world, because Al Saud proved to be removed from Arabism and because their foreign minister is a spokesman for Israel and the United States, adding “I cannot analyze the statements of that ridiculous and disgraceful person who doesn’t understand what he’s saying.”

On the plan of UN Special Envoy on Syria Staffan de Mistura, Mikdad said that the work of the committees he proposed has been discussed and how communication would be conducted in meetings, noting that de Mistura asserted that talks will not result in binding documents and the committees are merely committees of experts, adding that the Syrian government will announce its position at the right time.

Regarding de Mistura’s suggestion to have members of armed groups fight against ISIS alongside the Syrian Arab Army, Mikdad noted that President Bashar al-Assad has made it absolutely clear when he invited all Syrians regardless of their positions to stand together against terrorism, asserting that all those who make a decision to protect their homeland and embrace patriotism are welcome, while foreign fighters must either leave Syria or be killed.