6 years before the launch of a genocidal, never-ending and ever-expanding “global war on terror” across Asia and Africa, the funeral of the assassinated “hero of peace” Israeli Prime Minister Yitzhak Rabin proved to be an opportune moment to discreetly reveal an overt military alliance between U.S., Israel, Turkey, Jordan and Egypt against Iraq, Iran, Syria, Libya and the Lebanese resistance movement Hezbollah. 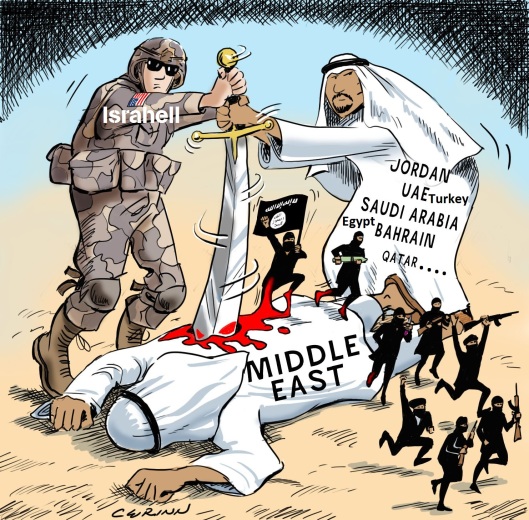 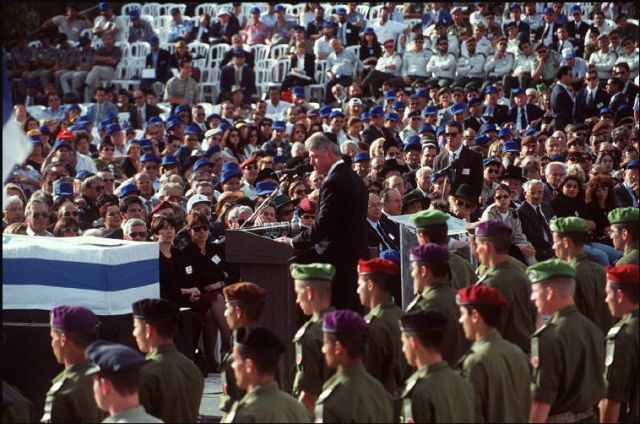 Excerpts from:  With blessing of U.S., Israel draws closer to Turkey and Jordan  –  Eyes on post-Saddam Iraq

Few realized it at the time, but the Israeli television cameras that panned the room for the nightly newscast were offering the first glimpse of a new strategic alignment in the Middle East. Six months later, both the promise of that picture and the complications that go with it are increasingly apparent. […]  Martin Indyk, the U.S. ambassador to Israel, says Turkey, Israel, Jordan and Egypt share the “common thread” of threats from terrorism and the prospect of rogue states [i.e. Iran, Iraq, Libya, Syria] possessing weapons of mass destruction. […]

Israel and Turkey have signed agreements calling for everything from free trade between the two countries to joint air-force training, naval visits and intelligence sharing. [1]  […]  This month, eight Israeli F-16 jets began training in Turkish air space. […]  Turkish-Israeli naval maneuvers in the Mediterranean Sea are planned for next month, and a joint mid-air refueling exercise has already been conducted [at NATO’s Incirlik Airbase in southern Turkey [2] ]. According to Turkish and Israeli officials familiar with the [February 1996 military cooperation] agreement, Turkey will also allow Israel to gather intelligence on Syria and Iran from Turkish soil, and Israel will help with training in preventing infiltration of [PKK] terrorists across Turkey’s border [with Syria, Iraq and Iran]. […]

For the first time, U.S. warplanes in March [1996] began using a Jordanian air base from which to fly daily sorties over [the no-fly zone in] southern Iraq. […]  U.S. officials say Jordan’s military cooperation has also led to a change in the Clinton administration’s “dual containment” policy, which calls for keeping both Iran and Iraq weak but making no intensive effort to overthrow either regime. Now the U.S. is employing an enhanced version, says one official, a kind of dual containment with teeth. “We’re stepping up the pressure on Saddam,” this official says. “And we’re only able to do that because Jordan has now joined the anti-Iraq camp.” […]  It is of critical importance to the U.S., Turkey, Jordan and Israel that post-Saddam Iraq doesn’t ally itself with more radical states such as Syria, Iran or Libya. […]

[1]   The list below indicates that an overt military cooperation between Israel and Turkey was actually put into practice even before Yitzhak Rabin began his second term as a prime minister in July 1992:

November 1993: […] [Israel and Turkey] sign a memorandum of understanding creating joint committees of senior officials to handle regional threats such as terrorism and fundamentalism. The countries agree to cooperate in gathering intelligence on Syria, Iran, and Iraq and to meet regularly to share assessments pertaining to terrorism and military capabilities in these three countries. Turkish foreign minister Hikmet Cetin visits Israel, the first visit ever by a Turkish foreign minister.

May 1994: A Security and Secrecy Agreement is signed, guaranteeing secrecy in the exchange and sharing of information between […] [Israel and Turkey].

September  1995: Leaders of both countries sign a memorandum of understanding for the training ofpilots in each other’s airspace.

[3]   [At the state dinner held by Israeli Prime Minister Yitzhak Rabin in honour of Turkey’s Prime Minister Tansu Ciller at King David Hotel on November 3, 1994], Mrs Ciller told her hosts, “I can assure you that you will have your promised land!” […]  The Israelis’ “promised land” extends from the Nile to the Euphrates, and takes in Turkish territory!

[4]   Commander of the Israeli Navy Ami Ayalon returned from Ankara on the eve of Israeli Prime Minister Yitzhak Rabin’s assassination.

“Greater Israel”: The Zionist Plan for the Middle East – The Infamous “Oded Yinon Plan”
[“A Strategy for Israel in the Nineteen Eighties” article by Oded Yinon, 1982]
by Israel Shahak, Global Research, 6 September 2015

Preparing the Chessboard for the “Clash of Civilizations”: Divide, Conquer and Rule the “New Middle East”
by Mahdi Darius Nazemroaya, Global Research, 26 November 2011

A Clean Break: A New Strategy for Securing the Realm
[report by Institute for Advanced Strategic and Political Studies, June 1996]
Information Clearing House