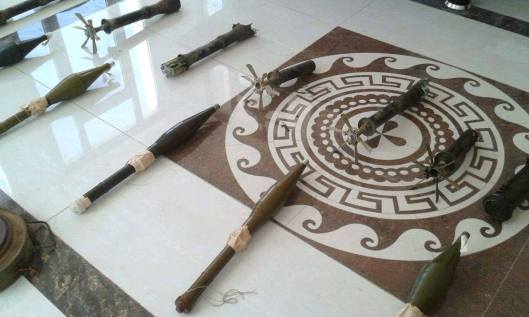 (SANA) ~ The popular defense groups confiscated amounts of ammunition, different sorts of shells and weapons in the northern countryside of Sweida province, foiling terrorists’ attempt to transfer them through al-Lajat area to terrorists positioned in Eastern al-Badiya (desert).

A source at Hasaka Governorate told SANA Thursday that the terrorists transferring the munitions were ambushed by the popular defense groups Wednesday evening in Kou’ Hadar area.

The terrorists suffered losses, with many of them getting killed, while others fled away leaving behind mortar shells, land mines, RPG shells, ammunition of machineguns and Israeli-made LAU missile, according to the source.

On Wednesday, authorities confiscated in cooperation with the popular defense groups a car loaded with rocket, mortar and artillery shells, mines and half a ton of TNT in the southern countryside of Sweida that was heading eastward.

(FNA) ~ The Syrian army troops informed by the intelligence agents and local forces in the Southern part of the country, seized two trucks of arms cargos, including US and Israel-made mines, in two parts of Sweida province.

The cargos of militants’ weapons and ammunition, including RPG, landmines and various types of ammunition, were seized by the Syrian army in two separate operation in the Eastern and Northeastern deserts of Sweida province.

There were 90 anti-tanks Israeli and US made mines, 25 RPG Shells and a number of BKS machinegun boxes in the seized cargoes.

The Southern province of Sweida, bordering Jordan, has since 2011 been one of the main spots for the infiltration of foreign terrorists and smuggling of arms cargoes to the militant groups inside Syria.

Also in late February, the Syrian army, after receiving tips from its intelligence agents, seized a vehicle loaded with large volume of ammunition on a road in the Southern part of Sweida province.

The cargo of militants’ weapons and ammunition, including RPG and mortar shells, was seized by the Syrian army on a road toward the Eastern Desert (Badiyah).

(SANA) ~ The concerned authorities in Sweida, in cooperation with the locals, seized on Sunday a vehicle loaded with large amounts of arms and ammunition in the western countryside of the southern province.

A source at Sweida Governorate told SANA that the vehicle was heading to the terrorist organizations operating in the eastern countryside of the neighboring Daraa province.

Earlier on Saturday, the authorities, in cooperation with the popular committees, seized hundreds of U.S. and Israeli-made anti-tank mines loaded in a pickup in the western countryside of Sweida. The weapons were bound for the terrorists in eastern al-Badiya (desert).

On January 20th, the authorities in Sweida foiled an operation to smuggle a large quantity of ammunition for medium-sized and heavy weapons from eastern Daraa to terrorist organizations in al-Badiya.