“Obama now says he is now very proud of not going through with the Syria air strikes on that fateful summer. He also frames his decision to turn back from the recipe as his defiance of US foreign policy establishment. But that is not in fact what happened. What really happened was that the air strikes that Obama had made imminent very blocked by resistance among the American people after which the Russians unexpectedly jumped in to arrange and offer US President a face-saving way out of the conundrum he had put himself in” 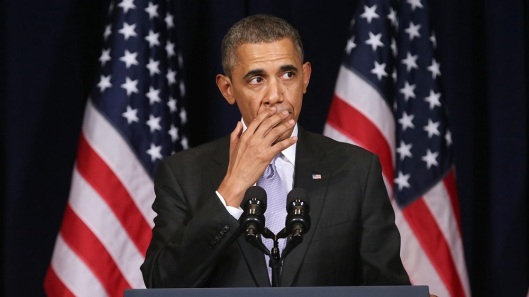 In the giant exclusive interview Obama has given to The Atlantic he has revealed that he is now extremely proud for backing down from air strikes against Syria that he very nearly launched in the summer of 2013.

You’ll recall that in 2011 when Assad was hit by a wave of anti-government protests Obama came out against him basically explaining that this meant that Assad was no longer the legitimate ruler of Syria and essentially recognizing a club of Syrian expats and defectors in Istanbul as the legitimate ‘government in exile’ of Syria.

Then in 2012 Obama explained that he would intervene military against Assad in the case that Syrian government used chemical weapons against the rebels who had risen up against it in 2011. This gave Assad a huge incentive never to ever use such weapons, but also gave the rebels an equally huge incentive to use them and make it look like Assad did it.

This is in fact exactly what happened in August 2013. Islamist rebels released poisoned gas near Damascus in a shoddily executed false flag operation. The chemical attack was a transparent hoax but that didn’t matter since the rebels had all the sympathy of the western media and officials and Assad had none.

In the next days it was clear that Obama Administration had been set on path to war. However, in the midst of warmongering emanating from Washington something became clear – the bombing campaign against Syria the Administration was preparing would not have the support of the American people. Americans had become too fatigued with constant war.

Feeling this Obama moved to share any possible popular anger with Congress by asking it to authorize the strikes he could have easily launched without such a measure. However, the Republican-controlled Congress was not inclined to sacrifice itself for a Democratic president and left him out to dry.

In a further hit to Obama the British Parliament similarly denied Cameroon and Merkel rang up Washington to tell Obama Berlin would not be taking part in Syria strikes.

Obama was now trapped. He had committed himself to bombing Syria but was increasingly aware of the vastly negative effect the adventure and the possible quagmire it could develop into would likely have on the popularity of his presidency.

Few could have predicted what followed next. Two minutes to midnight Russian diplomacy charged in for the rescue. Somewhere in between demonizing Syria and threatening airstrikes US Secretary of State also made the remark that the US would of course not bomb him if he gave up his chemical weapons. Kerry made the comment not as an actual offer, but as a rhetorical point thinking it showed how unreasonable and attached to gasing his own people Assad was, but Russians decided to take him at his word regardless.

Russia’s FM Lavrov quickly arranged a deal under which the Syrian government offered to immediately start dismantling its chemical weapons stockpile under international supervision. Obama now had the choice to either make Kerry look like a liar or step away from an illegal and illegitimate military adventure he was growing increasingly nervous about. He chose the latter – and the rest is history. USA did not directly join the Syria rebels against Syria’s Baathist government which continues to hold on in Damascus.

With an eye to his legacy Obama now says he is now very proud of not going through with the Syria air strikes on that fateful summer. He also frames his decision to turn back from the recipe as his defiance of US foreign policy establishment. But that is not in fact what happened. What really happened was that the air strikes that Obama had made imminent very blocked by resistance among the American people after which the Russians unexpectedly jumped in to arrange and offer US President a face-saving way out of the conundrum he had put himself in.

Obama on his “proud moment”:

“I’m very proud of this moment,” he told me.

And the fact that I was able to pull back from the immediate pressures and think through in my own mind what was in America’s interest, not only with respect to Syria but also with respect to our democracy, was as tough a decision as I’ve made—and I believe ultimately it was the right decision to make.”

This was the moment the president believes he finally broke with what he calls, derisively, the “Washington playbook.”

I have come to believe that, in Obama’s mind, August 30, 2013, was his liberation day, the day he defied not only the foreign-policy establishment and its cruise-missile playbook…