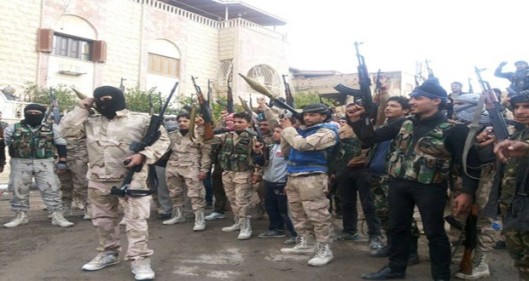 Report: People Revolt in Syria against ISIL after Palmyra Victory

(FNA)- The people in several ISIL-controlled areas across Syria have revolted against the Takfiri terrorists after the Syrian army and their popular allies in major victory won back the ancient city of Palmyra (Tadmur) last Sunday, media reports said.

“The unique operations in Palmyra changed the balance of power in Syria’s battlefronts to the extent that the Syrian people in other parts of Syria have been encouraged to revolt against the ISIL and other terrorist groups,” the Arabic-language al-Manar newspaper quoted battlefield sources as saying.

The Syrian people now believe that their political system has not been defeated, and rather gained breakthroughs in different battlefield, diplomatic and political areas, the paper wrote.

Al-Manar further wrote that the winning back of Palmyra by the Syrian army was a heavy blow to the ISIL terrorist group.

The governments supporting terrorism in the international arena are now themselves suffering from its backfire and they are now of the opinion that the Syrian army is capable of destroying the terrorist groups.

Last week, the General Command of the Syrian Army and Armed Forces confirmed the recapture of the ancient city of Palmyra and the mountains and hills overlooking it.

“Security and stability has been restored to Palmyra following a series of precise and effective military operations that were carried out by the army units with the help of the popular defense groups, being backed by the Syrian and Russian Air Forces,” the Army Command said in a statement.

The ISIL terrorist group was dealt quite a heavy blow with army’s capture of Palmyra, said the Army Command, adding that the achievement severely damaged the terrorists’ morale and pressed the start button for the organization’s collapse and defeat.

“This achievement proves that our brave army, aided by the friends, is the only effective force capable of fighting terrorism and eradicating it,” the statement said.

The Army Command clarified that the importance of  achievement stems from the significant strategic location of Palmyra city being a major link connecting the Central, Southern, Eastern and Northern areas, and from the historical and tourist status of the city as it stands witness to one of the most ancient human civilizations ever.

With Palmyra city under control, military operations against ISIL will expand starting from this springboard towards various axes and directions, on top being Deir Ezzur and Raqqa, especially that this victory helps in further tightening the noose around ISIL terrorists and cutting off their supply routes in areas under their control until having these areas fully freed, the statement explained.

The statement made it clear that the army, together with the popular defense groups and the Russian and Syrian Air Forces, will go ahead with military operations against ISIL and al-Nusra Front and other terrorist organizations. 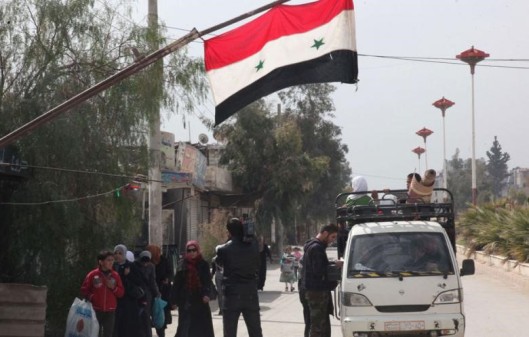 (FNA)- A large number of people in the ISIL-held city of Raqqa in Northeastern Syria have joined a fresh wave of anti-terrorism campaign to voice their support for the country’s army and president, informed sources said Monday.

“Civilians hoisted the Syrian Government flag across the squares of al-Sawameh, al-Dariyeh, al-Moshleb, Bab al-Baghdad and al-Barazi across city of Raqqa to show their loyalty to the Syrian army and government,” the sources said.

“Some civilians, meantime, chanted pro-government, pro-army and anti-ISIL slogans loudly across the city,” the sources added.

Fierce clashes increased as significantly growing numbers of ISIL members have deserted the group in recent weeks, the local sources in the ISIL-controlled Raqqa city in Northern Syria said.

Al-Ramliyeh region in Raqqa city has been scene of tough battle between the local forces and the Takfiri terrorists over the past three days.

The paper wrote that the clashes have been extended to al-Ferdows and al-Dariyeh neighborhoods in Raqqa city.

One Local source in Raqqa confirmed that around 200 suspect members of ISIL defected only in the last two days.