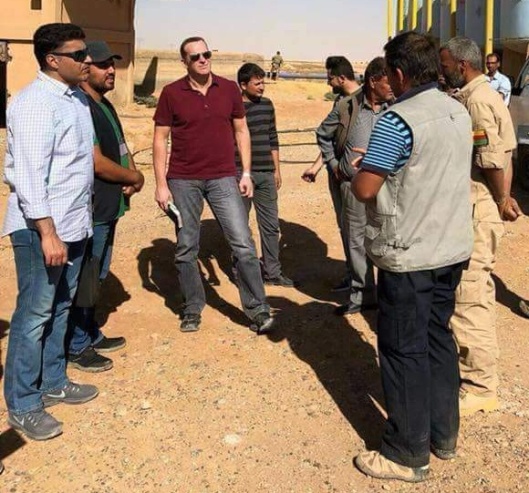 There is dangerous news evolving from Raqqa, Syria. While ISIS is largely defeated seeds get sown for its reappearance.

The Kurdish forces under the label SDF and led by U.S. special forces have defeated ISIS in Raqqa. Cleanup operations continue. The victory came only after the the U.S. and its proxies agreed to give free passage to the last few hundreds of foreign and Syrian ISIS fighters and their families. Since these boarded buses and were moved out of Raqqa on Saturday night nothing has been heard of them.

On Monday the U.S. coordinator for the fight against ISIS, Brett McGurk, brought an unwelcome visitor to Syria.

Picture (above) of the visit of Brett McGurk and Thamer al-Sabhan. Source: Unknown

The visit was confirmed by a (pro Kurd) journalist:

I was there. No pictures allowed. Meeting was indeed about reconstruction. https://t.co/lCC7Sryob0

Thamer al-Sabhan is the Saudi Minister for Gulf Affairs. He is known to be extremely sectarian and anti-Shia.

In 2015 Thamer al-Sabhan was appointed as the first Saudi ambassador to Iraq since the Iraqi takeover of Kuwait in 1990. He made no friends in Baghdad when he ranted against the Popular Mobilization Units, which had stopped and fought back ISIS. He denigrated the most revered religious scholar in Iraq:

Al-Sistani is well know for caring for all Iraqis and for speaking out against any form of sectarianism. This was an insult and threat to a very high religious authority with a huge following.

Sabhan’s loose talk did not go down well with the Iraqi population and its political circles. Immediately demands were made to kick him out of Iraq. Sabhan then claimed that an Iraqi official had told him that Shia groups directed by Iran were out to kill him. The Iraqi government denied that claim. But Sabhan continued to stir inner-Iraqi strife. The government finally asked Riyadh to call him back. In October 2016 Sabham was recalled from Iraq and appointed minister. He recently demanded “to eliminate the rogue Iranian regime.”

To invite him to Syria, as Brett McGurk (on order from the White House?) did, is a dangerous provocation.

The Trump administration is not willing to spend money on the rebuilding of Raqqa which was largely destroyed (video) by thousands of U.S. air and artillery strikes. The State Department promised to “lead” efforts to restore water and power supplies in Raqqa, but it wants to put the financial burden elsewhere:

“We will assist and take, essentially, the lead in bringing back the water, electricity and all of that,” State Department spokeswoman Heather Nauert told a briefing. “But eventually the governance of the country of Syria is something that I think all nations remain very interested in.”

It is a complete wrong approach. The U.S. should ask the Syrian government to immediately take responsibility of Raqqa and then leave the country.

Now Thamer al-Sabhan is asked to cough up money for “reconstruction” and “governance”. But Saudi Arabia does not have humanitarian interests. Just witness the slow genocidal war it is waging on Yemen. Saudi Arabia will only support groups and populations that are willing to follow its extreme Wahhabi version of Islam.

ISIS follows largely the same creed as the Saudis do. ISIS used Saudi schoolbooks in its schools. Many of its leading members come from Saudi Arabia. It is generally assumed, with some evidence, that Saudi donors financed ISIS – at least in its early days.

The ISIS members leaving Raqqa under free passage went where? The Syrian forces fighting ISIS along the Euphrates further east report that ISIS fighters have largely vanished from the area. They either melted into the general population or moved north of the Euphrates to hand themselves over to the U.S. proxy forces. What will happen to them? Who pays to feed their families?

ISIS was born out of the Sunni resistance against the U.S, occupation of Iraq. Around 2010/11 the resistance was perceived to be a dead force. But to others it was still a valuable anti-Shia instrument and money from the Sunni gulf regimes continued to flow. The Sunni terror groups in Iraq slowly grew back. The Obama administration saw ISIS develop but intentionally let it grow for its own political purposes. The U.S. military at times supported it in its fights against the Syrian state.

ISIS is not even completely defeated, yet the seeds for its next incarnation already get sown. Thamer al-Sabhan will use the money he spends in Syria to further stir the anti-Shia pot. He will finance those who will promise him to resist the “Shia axis” of Iran, Iraq, Syria and Lebanon. “Former” ISIS members will be welcome to join the “rehabilitation” work.

One hopes that the “resistance” axis in Syria will finds ways and means to kill these weeds before they grow back to size.