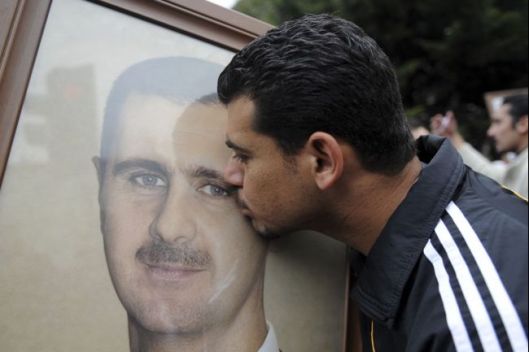 Syrians have held a mass demonstration near the capital, Damascus, to voice their support for the army and condemn terrorist attacks against civilians.

The demonstrators staged the pro-government rally in the town of Saidnaya, where they gathered at Municipality Square and chanted slogans in support of the army which has been battling foreign-backed militants over the past three years.

The ralliers called for national unity among all Syrians and insisted that national interests come first and defending it is everyone’s duty.

Saidnaya, which has come under several attacks by armed opposition groups, is home to an ancient monastery – a pilgrimage site for Christians around the world.

Meanwhile, the Syrian army launched fresh attacks to retake the town of Yabroud. The town is seen as one of the last militant bastions in the strategic Qalamoun region, which lies near Damascus.

Army units reportedly tightened the noose around a number of hill-top militant positions around Yabroud in a series of operations that killed scores of militants.

Since 2011, Syria has been experiencing deadly militancy that has reportedly left more than 130,000 people dead and millions displaced.

The Western powers and their regional allies — namely Qatar, Saudi Arabia and Turkey — are widely believed to be supporting the militants operating inside Syria.

In a report released in December 2013, the International Center for the Study of Radicalization (ICSR) said between 3,300 and 11,000 militants from over 70 countries were fighting against the Syrian government from late 2011 to December 10, 2013.

Eighty percent of the foreign militants fighting against the Syrian government are Arabs and Europeans, mostly from France and Britain, the ICSR added.

Nevaehwest on SFP from Press TV