BLOODCURDLING VIDEO OF THE CRIMES COMMITTED IN DARAA BY BARBARIAN SUPPORTERS OF DAESH–ISIS, WHO WANT TO BRING BACK SYRIA AND M.E. TO THE STONE AGE

Dera’a province: these are the actions of the so-called “moderate rebels“ and their mothers and children, so brainwashed, ignorant and fanatical wahhabite junkies, they do not realize the inhuman perverse acts that they are committing, not in the name of a alleged “god”, but for the ancient serpent. 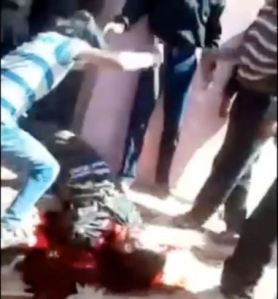 These are the people that Obama wants to give $ 500 million and they do everything they can to earn them, inciting their children to beat and stab to death a young Syrian soldiers, tied, while mother kills with a hammer on the head and unarmed men already on the ground, injured.

The young Syrian military on the ground had their hands tied, and he had no possibility to defend themselves.

To define these beings as “animals” would be an offense and injustice against throughout the animal kingdom. Because these are not people, but soulless and brainless bodies, alien monsters…….