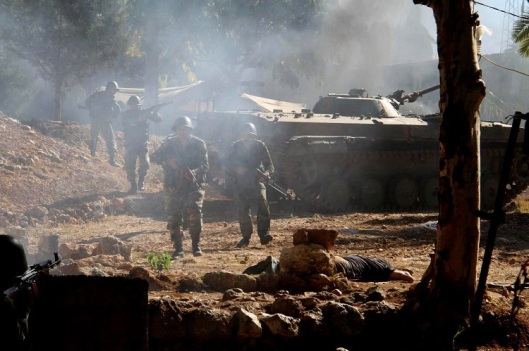 (29 September 2016) ~ Army and Armed Forces units, backed by the Army Air Force, launched more military operations against the armed terrorist organizations in different areas across the country, eliminating a large number of their members and destroying their equipment.

The Syrian Air Force destroyed tens of vehicles equipped with machine guns for
ISIS terrorists as it targeted their positions and convoys in the surroundings of al-Shaer Oil field and Tuloul al-Sawaneh, about 60 km northwest of Palmyra city in the eastern countryside of Homs province, a military source told SANA Thursday.

The Syrian Air Force destroyed a number of tanks and armored vehicles belonging to the terrorist organizations in the surroundings of Atshan, Tibet al-Imam, Maardes, al-Kabbaryieh, Tal al-Zaater, al-Shaatha, al-Telisiyieh, Skeik, Mourek and Kawkab in the countryside of Hama province.

An army unit targets a gathering of terrorists and their vehicles in Tisia town in the southeastern countryside of the southern Daraa province. 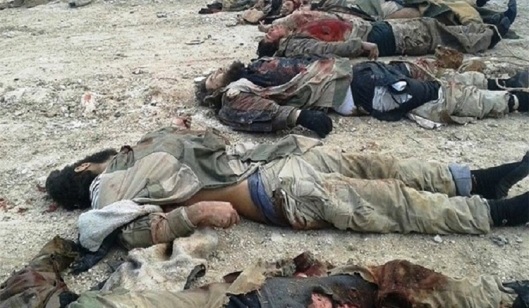 (28 September 2016) ~ Units of the Army and Armed Forces targeted the terrorist organizations’ positions, gatherings and vehicles in a number of areas across the country, killing and injuring scores of their members.

Units of the army thwarted a large attack by terrorists of Jaish al-Fatah, Jund al-Aqsa and Ahrar al-Cham on Karah and al-Zaghba villages in Hama northern countryside, killing more than 70 terrorists.

Earlier, the Syrian Air Force destroyed terrorists’ positions, gatherings, a number of tanks and tens of vehicles in Atshan, Zour al-Tibeh, Maardes, Eneiz, al-Kabbariyeh, Tal al-Zaatar and Qbeibat Abu al- Huda in the countryside of Hama province, according to a military source.

The terrorists who were hit suffered heavy losses in personnel and equipment and a number of their positions, tanks and machinegun-equipped vehicles were destroyed in the strikes.

An army unit destroyed a training camp for Jabhat al-Nusra to the northwest of Kisin village in the northern countryside of Homs.

Army units killed a number of Jabhat al-Nusra-linked terrorists in the neighborhoods of al-Sad and al-Bajabjeh in Daraa al-Balad in Daraa city, in addition to destroying their vehicles.

A position for terrorists and more vehicles were destroyed east of Dael town in the northern countryside of Daraa province.

Later, a military source said that army units destroyed drones carrying explosives deployed by terrorists from Jabhat al-Nusra and prevented terrorist groups’ infiltration attempts in the direction of the abandoned battalion from Da’el and Ibta’a towns in Daraa’s northern countryside, inflicting heavy losses in personnel and equipment upon them.

Later still, two leaders of terrorist groups were killed in a special operation carried out by an army unit on the road between al-Nazihin Camp and Gharaz south of Daraa.

The Syrian Air Force hit gatherings of terrorists and their vehicles in Khan Touman, Maarata, Kafr Hamra, Hreitan and Babis in the countryside of Aleppo province.

Scores of terrorists were killed in the airstrikes and a number of their armored and machine-gune equipped vehicles were destroyed.

Moreover, Army units destroyed a meeting headquarters for leaders within Jabhat al-Nusra in Salah-Eddin neighborhood and two weapons and ammunition caches of the terrorist organizations in Old City of Aleppo.

The Air Force of the Syrian Army carried out a series of air strikes on ISIS positions in the surrounding of al-Tharda Mountain, to the east of Deir Ezzor Military Airport and in the villages of al-Juneiniyeh, al-Husseiniyeh and al-Bugheiliyeh in the western countryside of Deir Ezzor province.

Many terrorists were killed or injured and armored vehicles were destroyed in the strikes. 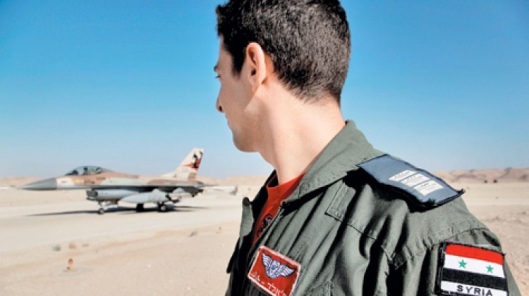 (27 September 2016) ~ The Army and Armed Forces, continued on Tuesday targeting the positions, gatherings, and vehicles of terrorists in several areas across Syria.

A military source confirmed Army units restored full control over al-Farafira neighborhood in Aleppo city after eliminating the latest gatherings of terrorist groups in it.

The source said in a statement to SANA that army units carried out a swift operation, during which they established full control over al-Farafira neighborhood to the northwest of Aleppo Citadel after killing many terrorists, most of them members in the so called “Noor Eddin al-Zanki Movement” and Jabhat al-Nusra, and destroying their weaponry and ammunition.

The source added that engineering units dismantled landmines and explosive devices that were planted earlier by terrorist organizations before the rest of their members fled away from the neighborhood.

The source pointed out that an army unit destroyed command sites for terrorist organizations through detonating a tunnel in al-Izaa neighborhood along with all terrorists inside it.

The source said that another army unit directed a concentrated strike on a site that terrorist organizations were using for monitoring the area of al-Brij to the south of Handarat Camp in the northern countryside of Aleppo, destroying it totally.

The Air Force destroyed a number of positions and vehicles belonging to the terrorist groups in Daret Izzeh town and Qubtan al-Jabal village to the west of Aleppo.

The Air Force carried out sorties against fortifications and dens of terrorist organizations on the axis of Kafr Hamra, Anadan, and Haiyan to the northwest of Aleppo, destroying their positions and dens and killing a number of their members.

A unit of the army and armed forces, in cooperation with popular defense groups, confronts infiltration attempts by terrorists and launch a counterattack and establish control over farms between al-Rihan and Tal Kurdi in Damascus countryside.

Army and Armed Forces unit destroyed several vehicles and positions of terrorist organizations and killed a number of their members in bombardments against their fortifications in Daraa al-Balad area in Daraa province, a military source told SANA.

A military source told SANA that army units targeted the terrorist organizations’ gatherings in the villages of Ma’an and its surroundings, Tayebet al-Imam, Mourek, Tal Bezam, and M’ardes in the northern countryside of Hama province.

The source added that the army destroyed three tanks, four combat vehicles, and six machinegun-equipped cars, in addition to eliminating a number of terrorists.

In the southern countryside of Idleb province, the Syrian Air Force destroyed terrorist organizations’ vehicles and killed a number of their members after targeting their gatherings and fortifications in the villages of Ba’rbo, al-Tamana town, and south of Khan Shaikhoun town.

The Syrian Air Force destroyed a number of ISIS positions and vehicles, some equipped with machineguns, in al-Sekhneh, north of al-Shaer oil field, south of Palmyra, and al-Rastan in Homs countryside, according to a military source.

The source confirmed the destruction of one of ISIS sites and the killing of a number of terrorists during an army’s airstrike on their locations to the south of Um Qobiba east of Homs city.

In the northern countryside of Homs, the Syrian Air Force carried out an airstrike on the fortified positions of Jabhat al-Nusra in al-Rastan city, destroying a number of the terrorist organization’ sites and killing many of its members.

(26 September 2016) ~ Army units on Monday continued to launch wide-scaled military operations against dens and positions of the Takfiri terrorist organizations across the country, inflicting heavy losses upon them in the arms and personnel.

Army and Armed Forces unit foiled an attack by ISIS terrorists on one of the military posts in the northern countryside of Homs central province.

A military source told SANA that over the past few hours, a unit of the army clashed with a terrorist group from the ISIS that infiltrated towards one of the military posts positioned in the surroundings of al-Quneitirat village near Homs-al-Salamyieh road.

The source added that the attack was foiled and six terrorists were killed and others were injured, in addition to destroying a machinegun-equipped pickup truck.

An Army and Armed Forces unit destroyed a gathering of vehicles that belong to terrorist organizations to the southwest of the crossroads on the Dam road in Daraa al-Mahatta area in the southern province of Daraa, killing many of the terrorists and injuring others.

Another army unit killed members of a terrorist group to the southeast of Bousra Square in Daraa al-Mahatta area.

Army units clashed with terrorist groups and hit their movements on the axes of Maan-Kawkab and Maan-al-Kabbaryia in the northern countryside of Hama, according to SANA reporter.

The reporter pointed out that 18 terrorists were killed during the clashes, including 11 from the so called “Al-Murabitin” group, 5 from “Jund al-Aqsa” and 2 others from “Abna’ al-Sham Movement”, in addition to destroying their weapons and ammunition.

The reporter mentioned the names of some of the killed terrorists, who included groups’ leaders.

Army units foiled an attack by terrorist groups in the direction of al-Thafi, al-Zughbi and al-Talisia villages in the northern countryside of Hama, killing and injuring most of the terrorists.

Four tanks, four armored vehicles, six vehicles equipped with machineguns and a 130 mm cannon were destroyed during the strike, in addition to killing many terrorists and injuring many others while tens of terrorists fled away towards al-Tamania in the southern countryside of Idleb.

(26 September 2016) ~ The command of the military operations in Aleppo called on the locals to keep away from the positions and gatherings of terrorist groups in the eastern neighborhoods of Aleppo city.

Four days ago the command announced the launch of operations against the terrorist organizations in those neighborhoods.

In a statement on Monday, the command reiterated that it would continue to take all measures to facilitate the reception of civilians who would leave the city’s eastern neighborhoods and ensure they are well-accommodated.

These measures and facilitations include also those who were misled and want to get back on the right track, the statement said.

Aleppo Governorate has opened several routes for locals to leave the eastern neighborhoods, as hundreds of civilians and tens of gunmen have already left via these routes.

The gunmen had their legal status settled, while the families were relocated to equipped makeshift centers.

(25/9/2016) ~ Entry of aid convoy of food and medical aid to the town of Madaya and the city of Zabadani, in Damascus countryside, coincide with the start of the convoy to enter the other towns of virulence of Kefraya Mahasrtin, in the northern countryside of Idlib.