“Israel is more ready than ever to strike Iran”

Only weeks after signing a “historic” nuclear agreement with Iran in Vienna on July 14th [PDF], the NATO axis and its prime ally Israel are already escalating their threats of an overt war on Iran, Lebanon and Syria.

Meanwhile, the brutality of NATO- and Israel-led genocidal overt and covert wars on Yemen, Syria and Iraq reaches new extremes… 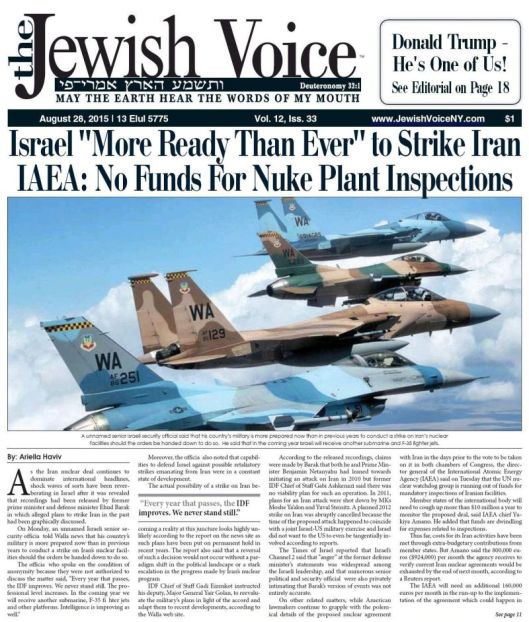 As the Iran nuclear deal continues to dominate international headlines, shock waves of sorts have been reverberating in Israel after it was revealed that recordings had been released by former prime minister [1999-2001] and defense minister [2007-2013] Ehud Barak in which [Israel’s] alleged plans to strike Iran […] had been graphically discussed [in 2010, 2011 and 2012].

On Monday, an unnamed Israeli senior security official told Walla news that his country’s military is more prepared now than in previous years to conduct a strike on Iran’s nuclear facilities should the orders be handed down to do so. 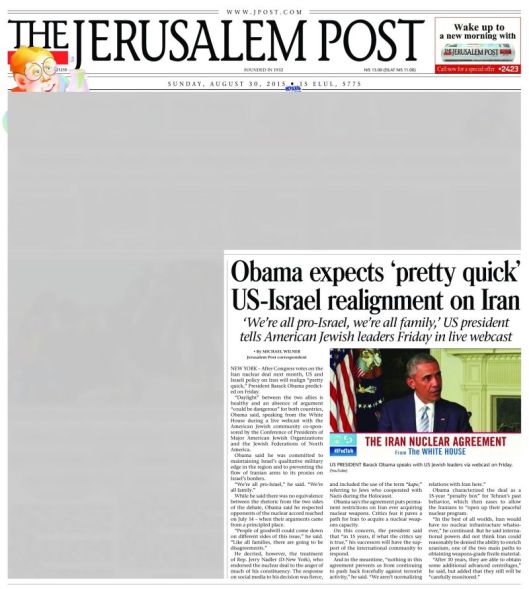 [Full transcript of U.S. President Barack Obama’s live webcast from the White House co-sponsored by the ‘Conference of Presidents of Major American Jewish Organizations’ and the ‘Jewish Federations of North America’, 28 August 2015]

“The JCPOA [ Joint Comprehensive Plan of Action ] (*) […] does not remove any of our options when it comes to preventing Iran from acquiring a nuclear weapon. As I have repeatedly emphasized, my Administration will take whatever means are necessary to achieve that goal, including military means. Should Iran seek to dash toward a nuclear weapon, all of the options available to the United States – including the military option– will remain available through the life of the deal and beyond. […]

As I have underscored repeatedly, it is imperative that, even as we effectively cut off Iran’s pathways to a nuclear weapon through implementation of the JCPOA, we take steps to ensure we and our allies and partners are more capable than ever to deal with Iran’s destabilizing activities and support for terrorism.  […]  [W]e will maintain powerful sanctions targeting Iran’s support for groups such as Hizballah, its destabilizing role in Yemen, its backing of the Assad regime, its missile program, and its human rights abuses at home. Critically, I made sure that the United States reserved its right to maintain and enforce existing sanctions and even to deploy new sanctions”

Excerpts from:  Israel defense chiefs see war with Hezbollah as matter of ‘when’, not ‘if’

In recent weeks, analysts have noticed a historic alignment that has taken hold between Hezbollah and the Lebanese military. For the first time ever, IDF [Israel Defense Forces] Northern Command soldiers manning lookout posts have noticed that Hezbollah and Lebanese troops have been conducting joint patrols. Now Israeli military officials are wondering just how deep the cooperation between the two organizations extends.

Israel is disturbed by these developments, and it has communicated its concerns to world powers. In some cases, Israeli officials have made clear their redlines regarding the nature and quality of weaponry it will permit the Lebanese forces to possess.

An interesting dynamic has taken shape between Hezbollah and the Lebanese government, and Israel is not taking it lightly. Hezbollah today has members of parliament and enough government ministers that can tilt major decisions in its direction. Will the Lebanese military fight alongside Hezbollah in the next war? Israel does not rule this out, and as such is preparing for the eventuality. […]

On the day that hostilities erupt, the northern communities will be evacuated. In their place will come battalions of combat troops. The evacuation plans have already been prepared, as have the plans for an attack on the other side of the border. Israel will unleash the full extent of its might and do all in its power in order to finish the next round within days.

The army’s comprehensive new strategic plan, recently unveiled by IDF Chief of Staff Lt.-Gen. Gadi Eisenkot, leaves no room for excuses. When the IDF embarks on the next war, it will stop only after it completes its mission. That means it will cease its fire after the enemy raises the white flag of surrender – or after the world stops the army from battering Hezbollah and bombarding Lebanese territory.

Excerpt from:  IDF troops prepare for possible incursion into Syria

The IDF [Israel Defense Forces] has already prepared plans to attack Syria in light of a recent military assessment that Iran has opened a new front against Israel on the Golan Heights.

Military exercises in the area over the last two weeks have focused primarily on a scenario of offensive operations inside Syrian territory in response to possible action from the Syrian border such as the infiltration of dozens of terrorists armed with anti-tank weapons, machine guns, grenades and light weapons into one of the communities along the border.

The exercises included possible IDF responses to such infiltrations with troops firing at fixed points on the Syrian side of the border. Simultaneously, officials expect a barrage of mortar bombs to be fired at communities in the Golan Heights during such a scenario.

The Leader: We will not allow the US to make economic, political or cultural inroads into Iran
Ministry of Foreign Affairs Islamic Republic of Iran website, 17 August 2015

Where is the official public record of President Obama authorizing US air strikes against Syrian government?
by Parliament Square Peace Campaign, 4 August 2015

Sayyed Nasrallah: “Our generation should not remain silent over the U.S. plot to carve up Iraq, Syria and Yemen” [Full Transcript]
al-Ahed News via Syrian Free Press Network, 7 May 2015

From the archives (front pages): 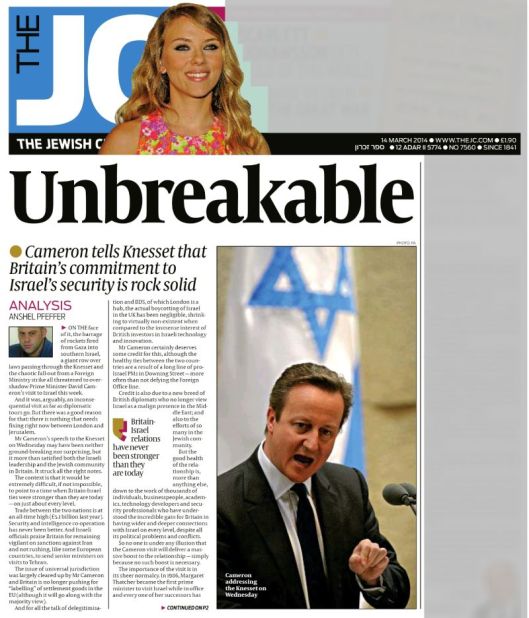 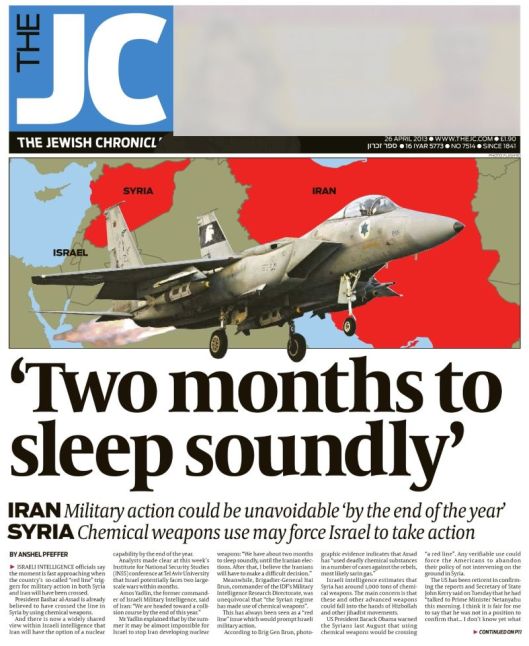 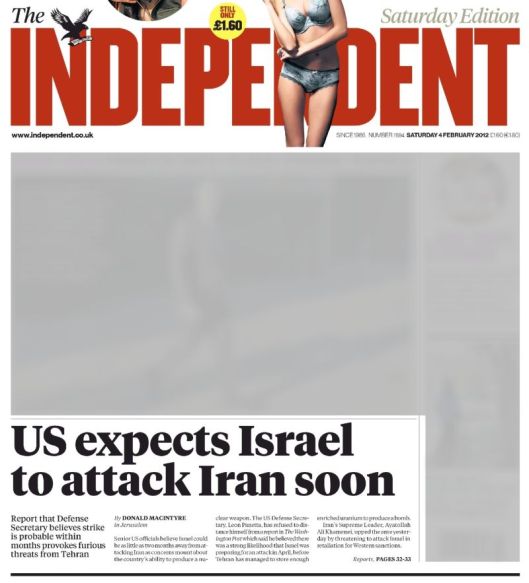 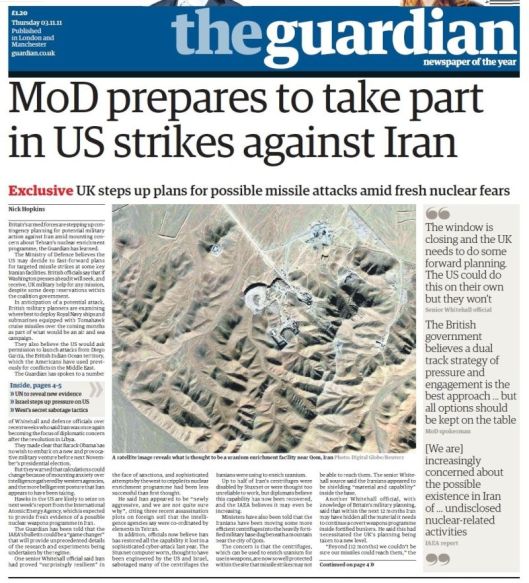 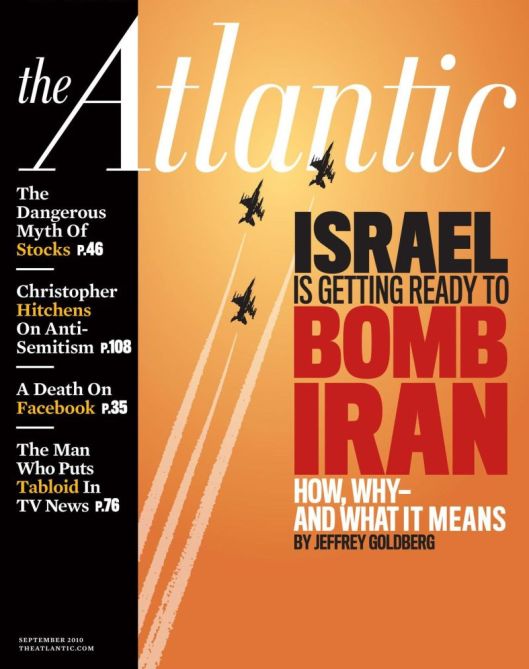 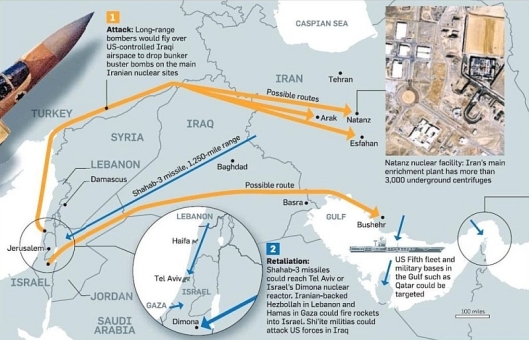 From the archives (propaganda alerts):

The Guardian: “Britain prepares to take part in US strikes against Iran”
propaganda alert by Cem Ertür, Indybay, 2 November 2011

Once again, a CSIS report designates Turkey as the optimum route for a possible Israeli attack on Iran
propaganda alert by Cem Ertür, Indymedia UK, 30 March 2010

Israeli PM Netanyahu: “Threats to our existence must be nipped in the bud”
propaganda alert by Cem Ertür, Indymedia UK, 29 August 2009