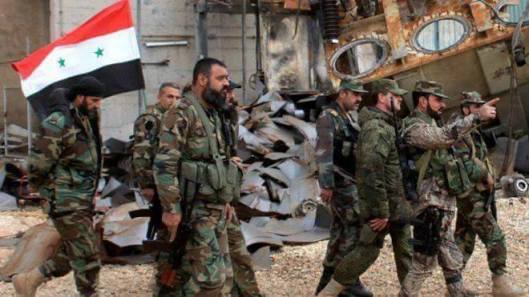 Syrian Arab Army units, in cooperation with the allied forces, established control over an area of above 120 km2 in the northeastern countryside of Aleppo after eliminating the last terrorist gatherings there.

A field commander told reporters that army units, in cooperation with the allied forces, continued their progress in the area surrounding the Infantry School and engaged in fierce battles with terrorist groups, inflicting heavy losses on them in personnel and equipment.

He pointed out that army units confronted attacks launched by ISIS and armed groups linked to the Turkish regime on the military points in the northeastern countryside of Aleppo.

The Commander noted that the terrorist groups which are supported by the Turkish regime falsely claim to be fighting ISIS in the direction of northeast of al-Bab, but it is the Syrian army and the allied forces who drove the terrorists of ISIS away from the entire area in 15 days.

Syrian army unit targeted with artillery the movements of Daesh terrorists in al-Qasser village to the northeast of Sweida city, according to a military source.

The source added the ten Daesh members were killed due to the shelling and two of their vehicles were destroyed.

Terrorist attacks kill 7 civilians in Damascus and its countryside

Six civilians were killed due to a terrorist rocket attack on Harasta suburb in Damascus Countryside.

A source at Damascus Countryside Police Command told SANA reporter that the attack, which included several rocket shells, was launched by terrorists of the so-called “Jaish al-Islam” who are positioned in Eatsern Ghoutaby, adding that another person was injured due to the selling.

ِA police source told SANA that terrorist organizations targeted with a rocket shell residential neighborhood of al-Masharka in Aleppo, injuring a woman and a child.

Later, the source added that 6 other persons were injured in a rocket shell launched by terrorists on a building in Baghdad station neighborhood in Aleppo.

In the same context, another person was also injured when terrorist groups affiliated to Jabhat al-Nusra opened sniper rifle fire on the locals’ houses in the terrorist-besieged al-Fouaa town in the northern countryside of Idleb province.

Local sources told SANA that the sniper shootings came from Binnesh town, confirming that one person was injured in the attack.

A new batch of Russian humanitarian aid was distributed on Thursday to displaced people in al-Muallaqa village in cooperation with Damascus Countryside Governorate.

Representative of the Russian Coordination Center in Hmeimim Alexei Ivanov said 200 food portions, containing rice, sugar and canned food, were distributed to the displaced families in the village as part of the aid provided by Russia to help alleviate the Syrian people’ suffering due to the terrorist crimes.

For his part, Abdul Rahman al-Khatib, the mayor of Harjalleh town in which al-Muallaqa village is located, hailed the Russian stance in support of Syria, pointing out that Damascus Countryside Governorate provides all services and the basic needs to the 800 displaced families currently residing in al-Muallaqa village.