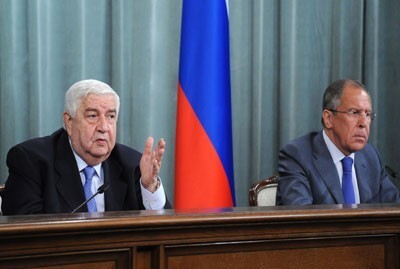 Al-Moallem: Terrorism Escalated Despite Withdrawal of Army Units from Some Provinces

Apr 11, 2012 – MOSCOW – Foreign and Expatriates Minister Walid al-Moallem affirmed on Tuesday that the Syrian government has withdrawn army units from some provinces, yet terrorism activities escalated and spread to other areas, noting that Syria’s didn’t ask Annan for written guarantees from armed groups and countries sponsoring them, but rather merely asked him to relay the results of his calls with them.

In turn, Russian Foreign Minister Sergei Lavrov reiterated his country’s calls for ending violence and settling the crisis by Syrians without undermining Syrian sovereignty, calling on the US and other countries supporting the Syrian opposition to pressure them to carry out Annan’s mission.

In a joint press conference with Lavrov, al-Moallem described the talks between them as constructive, and that they focused on ensuring the success of the mission of UN Envoy Kofi Annan, adding that there is daily coordination between Syria and Russia.

Al-Moallem: Syrian government has withdrawn some army units from some provinces

He said that the Syrian government has withdrawn some army units from some provinces in accordance to the third article of Annan’s plan and allowed more than 28 media outlets to enter Syria since March 25th.

Al-Moallem said that Syria received the head of the International Committee of the Red Cross in order to deliver aid to those who need it in cooperation with the Syrian Red Crescent, and that many people detained for rioting were released, yet despite all these positive steps the acts of terrorist groups escalated and spread to other provinces.

He stressed that it’s in the Syrian government’s interest to reach a sustainable cessation of violence, which should take place in the presence of international observers to monitor any violation.

Al-Moallem said that a team visited Damascus and held talks which resulted in a protocol on the international observers mission as long as Syria has a say in the choice of countries from which the observers come and that they respect Syria’s sovereignty.

Al-Moallem:Syria welcomes Russia’s offer to host a conference to prepare for national dialogue

“I asked Annan to contact the armed groups and the countries supporting them… I asked him to send me a letter on the results of these communications,” he said, affirming that the Syrian government is prepared for national dialogue when all the opposition is ready for it, adding that Syria welcomes Russia’s offer to host a conference to prepare for national dialogue.

Al-Moallem affirmed that Syria would pursue its good-intention work with Annan’s technical team to reach a cooperation protocol, hoping that Annan will be able to form a team of observers which Syria approves of, adding that Syria welcomes Russian observers in advance and thanks Russia for its form stances against foreign interference in Syria’s affairs and its commitment to ending the crisis.

For his part, Lavrov said that his meeting with al-Moallem comes at a critical moment for the Syria and the entire Middle East, noting that his country has always aimed at halting violence in Syria, ensuring the Syrians’ right to self-determination, and resolving internal issues through dialogue without foreign interference.

He said that Russia supported the Arab League plan proposed in November 2011 which resulted in an Arab observer mission, but sadly this team was suspended by those who came up with the initiative themselves.

Lavrov said that Russia supports Annan’s plan, noting that Russia received affirmations from the Syrian side regarding its commitment to its obligations as per this plan, adding that his country believes that Syrians can work with more briskness.

Lavrov asserted that the Syrian opposition did not commit itself to Kofi Annan’s plan, pointing out that the countries which support the opposition made statements to thwart Annan’s mission even before it starts.

He called on all parties and international forces to pressure the armed and political opposition in Syria to reach a complete ceasefire, adding that contradictory information provided by the various parties underscore the pivotal  importance of the sending the observer team to Syria, adding that Russia agreed to transfer its UNDOF members from the Golan to Syria to act as observers as the UN suggested.

“The presence of international observers will contribute to convey the reality about the commitment of every side to Annan’s plan,” he added.

Lavrov expressed the hope that the media would be objective in covering the situation in Syria, expressing condolences over the deaths of journalists who died while covering the events in Syria and stressing the need to not endanger Arab and international journalists.

He also stressed the need to allow for humanitarian aid to reach those affected by violence and launch comprehensive and democratic dialogue among all Syrians so that they might decide their own destiny, affirming that Russia has no hidden agenda and is committed to peace in Syria and Syrians’ national interests.

In response to a question on media coverage, Minister al-Moallem said that most Russian media outlets to enter Syria and operate in it because they’re objective and professional, adding that there are currently more than seventy satellite channels who have special agendas targeting Syria, primarily al-Jazeera, al-Arabiya and France 24.

He affirmed that Syria welcomes objective media outlets and that it will provide them with every facilitation as long as they enter Syria legally, not enter illegally with the help of armed terrorist groups.

In turn, Lavrov stressed the need for media to cover events in Syria objectively, saying that while journalists should operate without bias, there have been some exceptions which was apparent from the stories of journalists who resigned from al-Jazeera due to its activities.

Lavrov noted that there are more than 100,000 Russians living in Syria, and that the Russian Embassy  in Syria sends information that show that the opposition in Syria isn’t entirely peaceful, explaining that Russia received information about the discovery of landmines, explosives and weapons and many terrorist activities that affected several cities and the shelling of Syrian armed forces by the opposition.

In response to a question on the guarantees Syria wants from armed terrorist groups, al-Moallem underscored that Syria did not ask Annan for “written guarantees” from the armed groups and those who support them, adding “we asked Annan to contact these groups and to give us the results of such contacts. We do not ask the terrorist groups which kidnap, kill and destroy to send us guarantees. We want Annan to convey this to us.”

Al-Moallem:Syria is a sovereign country.. it has the right to defend this sovereignty against any violation

Regarding Syria’s interpretation of Turkey’s intentions, al-Moallem said that Syria is a sovereign country and that it has the right to defend this sovereignty against any violation, adding that unfortunately Turkey is part of the crisis in Syria and it should announce its commitment to Annan’s plan on the basis of the respect of all states to the Syrian sovereignty.

He pointed out that Turkey doesn’t just host those who were forced to flee their homes by terrorists, but it also hosts armed groups and establishes camps for them and allows these groups to smuggle weapons into Syria and to infiltrate the Syrian borders in violation of Annan’s mission which calls for halting the use of violence by all sides.

“Annan told me in our last phone call that the halting of violence will be followed directly by disarming the armed groups… If this is the case, how could this happen while the operations of smuggling weapons and gunmen from Turkey are underway?” asked al-Moallem.

In this regard, Lavrov said that Turkey is a sovereign country and can do what it wants in its territory, and that the same applies to Syria as well, adding that he heard Ankara’s statements which predicted the failure of Annan’s mission and said that Turkey will wait then move on its own.

“Yesterday, I phoned my Turkish counterpart and posed this issue… he affirmed me that Turkey will not take any unilateral steps,” Lavrov said.

Regarding US statements that Syria isn’t upholding its obligations of withdrawing forces from cities, Lavrov said that the UN Security Council did not call for the withdrawal of the armed forces but to the beginning of pulling them back concretely from the Syrian cities, stressing the need for a ceasefire to be reciprocal with international monitoring, adding that there are no ultimatums or other demands.

Lavrov called on the US and other countries who are friendly with the Syrian opposition to pressure the opposition and encourage them to commit to Annan’s plans, noting that Russia shouldn’t carry the burden of everything.

Lavrov to Annan: Syrian Opposition and Sides Supporting Them Must Make Urgent Arrangement to Guarantee a Firm Cessation of Violence

Later, Lavrov stressed to Annan the need for the Syrian opposition and the sides supporting them to make urgent arrangement to guarantee a firm cessation of violence, calling on Annan to work actively with them in this regard.

In a statement, the Russian Foreign Ministry said that Lavrov briefed Annan during a phone call on the results of the talks he held with Minister al-Moallem on means for solving the crisis in Syria, underlining the Syrian leadership’s readiness to continue implementing the plan approved by the Security Council and cooperate actively with Annan’s mission.

Lavrov also reiterated his country’s support for Annan’s efforts and the need for unconditional implementation of his plan’s articles by all sides , adding that the deployment of UN observers effectively will be an important step in guaranteeing the accurate implementation of Annan’s plan.

The statement noted that Annan also valued highly the Russian side’s efforts to ensure the success of his mission.